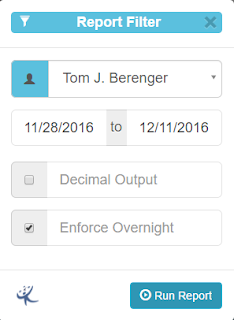 We are already working  on the Emplotime version 3.3 which apparently will include Projects and Exception Reports, however, in the meantime we have released a small version. The version 3.2 recently released is packed with some goodies related to employee working hours reports.
This new feature is going to be very handy for those companies having employees working overnight.
The filter reports now includes the possibility to check the "Enforce Overnight" checkbox.
By selecting this checkbox, the output report will maintain the whole transaction within the same day. (Preventing of getting it separated in two different days). 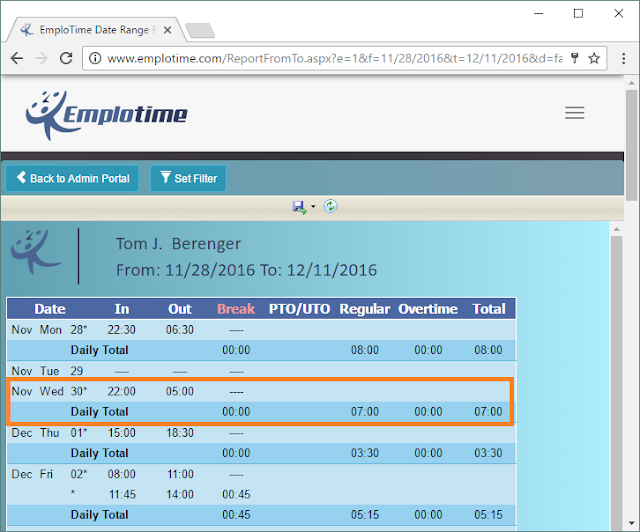 For example, if Tom clocked In on Wednesday at 10:00 PM, and clocked out at 05:00 AM in the following day, the entire transaction will be recorded for Wednesday.
night shifts reports overnight

Popular posts from this blog

Emplotime Location Feature has evolved to Geolocation Feature. By selecting this feature, the company's manager/administrator will be able to receive an accurate location for the clocking In and Out transactions of their employees Employees will no longer be requested to manually provide a working location from a list, since from now on, the clock page will automatically provide the geoposition of the Employee at clocking time.
How to select this feature?

From the Administrator portal, click on Company Details and select Geolocation

Emplotime Version 3.3 is out!
A new feature allows to highlight exceptions on all reports.
You will be able to choose from two different exception types:
1) Strict
2) Global

STRICT You may select Strict exception in case you require from your employees to arrive and leave at a specific time. So in case the employee arrives late, the reports will highlight the entry "on red" to know about the "Late Entry". see screenshot bellow.


GLOBAL In the other hand, Global type will be selected when you only require from your employee to work a specified amount of working hours. In this case, the "total" will be highlighted if the employee works less than required. see screenshot bellow.

In order to configure the required exception, you only need to open the "Company Details" from the Administrator Portal, and set the Company Working Hours required and the "Highligh…
Read more

What is buddy punch?
We're not talking about punching a friend here. Buddy punch is when an employee at work clocks in ("punches in") their friend when their friend is late to work.

In the following article, we'll show how to avoid buddy punching.
By default, emplotime offers an open list on the virtual clock where the employee selects itself in order to clock in or out.

After checking the buddy punch lockout feature, the virtual clock will still display the employees open list, but, after the employee selects itself and clocks In/Out, he will be prompted to enter his 4 digit pin code.


How to activate the "Buddy Punch Lockout"?